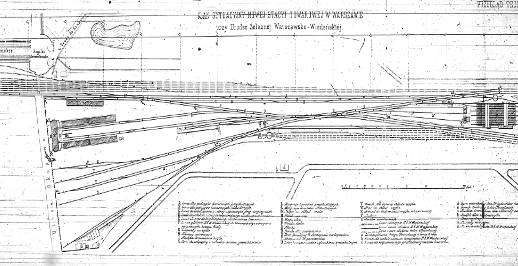 Two warehouses were situated perpendicularly to the logistics office, one used to receive wares, the other to send them out. Between them tracks were laid. The model of a railroad warehouse that crystallised in the 19th century in Europe was characterized by an elongated, rectangular outline with loading docks and a big overhang that protected the goods and people from rain. The length of the warehouses was adapted to be able to take in as many freight wagons as possible, to either load or unload them. Warehouses usually had one storey with the floor on the level of the loading docks, its facade fitted with factory windows, sliding two-wing metal door, and reinforced wooden door.

As seen on the station design dated from 1876: "the warehouses weren't directly adjacent to the logistics office. These three stand-alone buildings were a part of a U-shaped complex with its arms drawn open, away from the base. Both these buildings were identical in size and construction. They were 143 metres long and 12 metres wide, each one was an elongated, one-story rectangle, built with red brick, and of little architectural detail. To ensure efficient carriage flow between the buildings, a transfer carriage was installed. It enabled moving empty carriages from the incoming goods warehouse to the outgoing goods warehouse.

"The warehouse had double rectangular windows. The facade is symmetrical and multi-axis. It's covered by a pitched roof with an overhang over the loading docks. The roof was usually covered with roofing felt - known and used since about 1850, called the asphalt board. The warehouses were divided into three parts by brick walls with sliding doors (as a means of fire safety). At both ends of the warehouse, offices for the wagon staff were situated. In the south, on the axis of the northern warehouse, a square lavatory was built." (E. Leszczyńska, "Zabudowa Stacji Towarowej Kolei Warszawsko-Wiedeńskiej oraz Tymczasowy Dworzec Główny - rys historyczny", Warszawa, str. 2).

Nowadays the building has been renovated and plastered. From 1900 to 1903 another warehouse was built onto its axis, same in size and construction. The station design from 1903 shows a slight distance between them. Back then they weren't connected to each other, they were separate warehouses. Today they're one, connected string of buildings. The first one holds a small exposition room of the Railway Museum, offices, the Mirrors Hall (in the 50s and 60s the station's restaurant), and workshops. The second, more recent of the former warehouse buildings from 1903 holds the Museum's boiler house and other facilities that belong to PKP (Polish State Railways).

The west side of the warehouse had served in the post-war period as a waiting room; in 1999 it was deconstructed. Similar red-brick warehouses with wooden roofs were also present at stations in Żyrardów, Skierniewice, and Częstochowa.