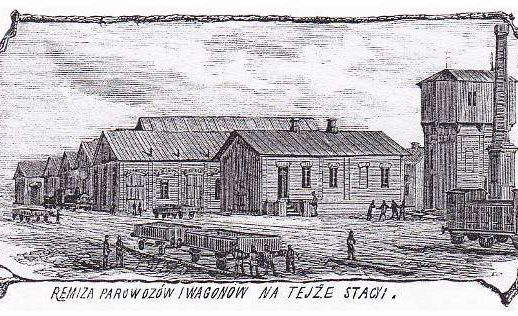 At the goods station, parallel to the warehouses, were tracks used for direct mass trans-shipment (lime, coal, bricks) from carriages to horsecars. A gate hoist, built over one of the tracks, was used to transport big or heavy wares. Parallel to it, about 20 metres further, was a 98m by 10m grain warehouse. (Noted by A. Paszke)

“It was a canopy with brick underpinning and a wooden deck. The pitched roof was covered with asphalt board. Commercial buildings on the station also consisted of two forward-sideward loading docks with a ramp used for freight hauling, and an animal pen, both built where the Okopowa and Kolejowa street met. West of the objects, buildings for administration and railroad workers were situated. They consisted of a household for railroad workers whose job focused around the circular railway. It was located on Kolejowa street.” (E. Leszczyńska op. cit. w przyp. 1).

"West of the warehouses, near Tunelowa street, coal dumps and a big steam locomotive shed with an engine house were located, as seen on the picture above. It was built as a 104m by 43m rectangle with 36 parking spaces accessible by two transfer carriages. Next to the steam locomotive shed there were a railway turntable and a carriage maintenance point with a water crane (a similar one, able to pump 150 litres per minute, can be seen in the Railroad Museum.) In the past such cranes were present in all of the bigger railway stations, they were used to fill the steam locomotives with water. Besides that, there were an inspection station and a carburisation deck in the back. All that was accompanied by a water station with a water tower (as seen on the picture above.) There also were a supervisor office, a forge, carpentry, magazines, and rooms where lamps were cleaned. A coal dump caretaker's house was also there; it was a one-storey, rectangular, red-brick building with arched windows and a pitched roof. The building that was the furthest from Towarowa street was the railroad workers' night quarters located amongst parks. It was two-storey, rectangular and built from red brick as well. The whole station was located about a metre lower than the general railroad tracks, but evenly levelled terrain made it impossible for carriages to meet; in the 19th century, they weren’t equipped with brakes. Construction of the new goods station of Warsaw-Vienna Railroad was a big undertaking. Its size can be proved by the fact that on the occupied territory there were laid over 15 km of tracks and nearly 100 turnouts, including - for the first time in Poland, the so-called three English crossovers (English crossover - a crossroads of tracks from two directions, from which you can go in two different directions). The light was brought to all relevant areas of the station. There were 42 light points powered by gas provided from gas plant in Solec. Over the years the station was continuously expanded.

The first expansion started in 1880 until the turn of the century occupied area increased by further squares situated at Okopowa north and west of Tunelowa street. At the same time, the number and length of tracks significantly increased - eg. in the area of expeditionary warehouses number of tracks has increased from 9 to 21. The new tracks were arranged on, among other places, the newly utilised space along Okopowa street, also on the terrain formerly occupied by coal warehouses, moved over Tunelowa street. To make it possible for the trains from the main railroad to go directly to the Circular Rail, an arc-shaped supplementary track was constructed over the western part of a village named Czyste. The great changes that happened over the first 25 years of the freight station existence tell us about the rapid increase of traffic, serving the increasing number of the client both sending and receiving goods, in Warsaw. Also worth noticing is the fact, that the freight station with its sidetracks and the industrial district Wola has become over the years, depended on each other. (A. Paszke, „Dworce Drogi Żelaznej Warszawsko-Wiedeńskiej”, Oddział I, Warszawa – Skierniewice 1845-19120, Warsaw 1986, p. 11-12.).

Due to construction of Circular Railway and railway bridge near the Citadel, the goods station, as well as Wiedeński railway station of standard gauge Warsaw-Vienna Railroad, were connected with broad-gauged Warsaw-St. Petersburg railroad and Warsaw-Terespol railroad, which were situated on the right bank of the Vistula river. Between 1905-1908 next to the railway bridge a second bridge was built in the distance of 32 m. The upper level also had two tracks of both widths. Lower levels of both bridges were destined for road traffic and pedestrians.
The water tower and the steam locomotive shed of the Warsaw-Vienna Railroad goods station, 1876 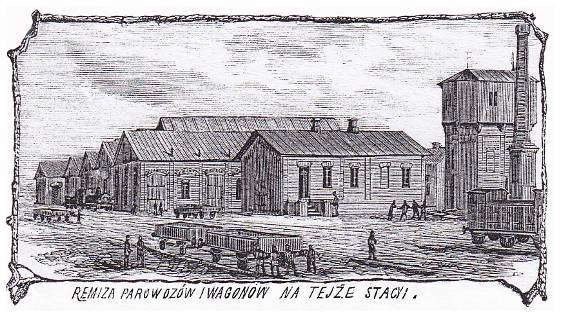