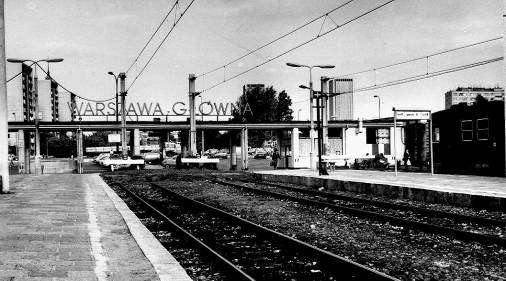 „Between the side pavilions and outside the south pavilion three groups of dead-end tracks and platforms were placed. The first group of three tracks and three side platforms (two one edged and one island), made for dispatching the long-distance trains was placed between the side pavilions. The side platforms were connected by a bay platform, in front of the main hall. South of the long-distance tracks, three tracks and two platforms for the suburban rail were placed. South of them in turn, five tracks and three platforms were built for both long-distance and suburban rail. They reached passages placed at the exit to the vehicle stand. The pavement leads the passengers to bus and tram stops on Towarowa street. There was no separate hall for arrivals. Luggage halls were entered directly from the street. The luggage was hauled back to the luggage hall the quickest way, without disturbing the flow of passengers.” (M. Krajewski, “Dzieje Głównego Dworca Kolejowego w Warszawie”, PWN, Warszawa 1971).

The problem of communication with Warsaw after the war

„Construction of the train station constituted an effort made to solve the problem of communication with Warsaw after the war. The main objective for the designers and construction teams was to organise an architectural arrangement friendly to the workers and passengers.” (E. Leszczyńska, "Zabudowa Stacji Towarowej Kolei Warszawsko-Wiedeńskiej oraz Tymczasowy Dworzec Główny - rys historyczny", Warszawa, p. 4).

In the years 1948-1950 the station was attended by 100, sometimes even 120 trains every 24 hours.
On long distance rail, trains went to Cracow, Katowice, Wroclaw, Poznan, Łódź, Szczecin, Gdansk and Bydgoszcz. Suburban rail served trains to Warka, Sochaczew and Żyrardów.

Inside of the temporary Main Railway Station was accommodated for a large flow of passengers, practical floors made of terazzo were laid out, while the walls were laid with terracotta.
In 1953, some rooms at the station were adorned.

Since that time, two stucco reliefs have remained. Most likely they were found in the chief station officer cabinet in the northern mezzanine. The reliefs, a work of socialist realism by sculptor H. Tarkowski present workers with their work tools as their attributes. Between them, a fresco is placed, showing the panoramic view of Warsaw.
Exit into town from the arrival platforms on the Main Railway Station, 1985