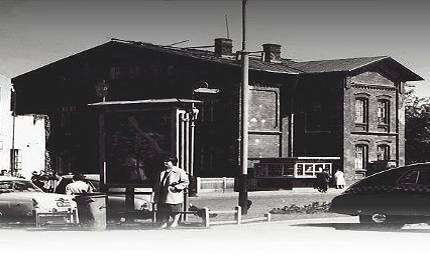 The first building constructed at the goods station was the logistics office, situated alongside Okopowa street. “It was designed on a rectangular outline with side avant-corps. Building prism was much fragmented, built of brick, unplastered, covered with pitched roofs made of galvanized sheet metal. One storey main building measuring about 31m x 14m had on its axis a two-storey avant-crops. To the building were adjunct storey side wings, which had about 17m in length and 14m in width. From the north and south, the building was flanked with two-storey annexes. On the right side of the annexe, there is a canopy supported by columns. The columns are placed on a high foundation. The drawing doesn’t explain what function the canopy served. Probably it was a side entrance to the building. Logistics office’s ground floor housed offices and ticket offices, on the first floor were official flats for railway workers. On the east, a track was situated on which the railroad trucks were moved. The architect designing the warehouse used simple means of expression adjusting the building’s appearance to its functions. As a deviation from the functionalist industrial style that this building exemplifies, there are some decorative elements, enriching the architecture, which the architect applied very sparingly, achieving diversification of the wall in elevation by a composition of bricks forming panels and pilaster strips. Annexes panels are crested with serrated frieze, their facade is also decorated with a separated window with an arcade framing (E. Leszczyńska, “Zabudowa Stacji Towarowej Kolei Warszawsko-Wiedeńskiej oraz Tymczasowy Dworzec Główny – rys historyczny”, Warsaw, p. 1).

The logistic office’s design had distinct features of industrial architecture, the main school of thought of which - in this part of Europe – was centered in Germany. The industrial style came with industrial revolution at the turn of XVIII and XIX centuries. The revolution was caused by a switch from handcraft production to mechanical factory production on the grand scale. With the industrial revolution came rapid development of science and technology, and also many inventions like Watt’s steam engine, voltaic pile, electromagnetic telegraph. The industrial style is characterized by simplicity, modest forms and a sparing use of materials. Buildings constructed in this style distinguish themselves, first of all, by functionality - as they are to be comfortable and cheap to use. Although the industrial style is characterized by utilitarianism - railway stations, railway objects and residential buildings for railway employees fascinate with their simplicity of form, and also with a modest design of the facade, drawing the inspiration for its forms from gothic or Romanesque architecture style (cornices, pilasters, friezes, pilaster strips, arc-crowned vaults, windows framed with arcades and windowsills.) Building’s facades at the goods station didn’t differ in terms of style from other buildings situated at Vienna Railroad.
Linesman’s houses, residential buildings for railway employees and warehouses at the station DŻWW in the late 1870s and 1880s were very modest and they served utilitarian purpose therefore simplicity was completely intentional.

In the logistics office, its simple form calls attention to wooden decoration with vertical peak crowned with pinnacles, which is characteristic for neo-Russian style in architecture of the Russian Empire. This style, also known as “the Ropet”(in Polish: “styl ropetowski” thanks to its popularizer, archtect J.P Ropet, alluded to the style of old, richly decorated wooden buildings of Great Russia. We can find elements of this style in the railway architecture of Eastern Poland.

Inspiring influence of Russian architecture on railway’s buildings in Warsaw expresses itself fully in Kowel Railway Station of Vistula River Railroad, build in 1877 and situated in the area today occupied by Dworzec Gdański railway station. This building was a typical example of Russian presentable architecture of the late 19th century. It was built of logs with emphasis on decorative components. The shuttering was made of decoratively carved ledges. Buildings in this style usually had a gabled rafter roof with pinnacles at the top.

In the design of logistics office at the goods station, we can see the influence of the then prevailing trends in the area. Warsaw, situated in the western part of the Russian occupied territories of Poland, reveals in railway architecture influences of both industrialized West, as well as wooden, decorative elements of Russian origin.

Part of the office’s building survived until the post-war period. In the mid 60s, while widening Towarowa street and building a second lane, it was demolished.
The DŻWW logistic office at Towarowa street, 1950’s