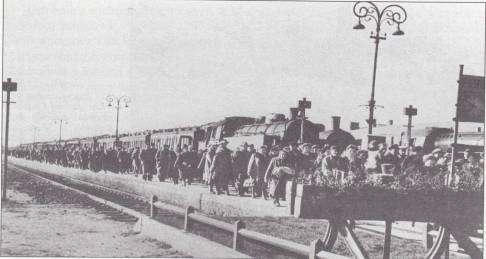 Between 1903-1914 and during the inter-war period the goods station was expanded to the north. New sidetracks, ramps, and warehouses were built. The station went through many transformations as the second line of cross-town rail was under construction in 1933. During the Second World War many railway objects in Warsaw were destroyed.

The only railway objects, which survived both World Wars retaining their usability, were buildings of the former goods station of the Warsaw-Vienna Railroad, situated at Towarowa street. In 1945 in order to restore the communication in destroyed city, fast and provisional reconstruction of railway and railway buildings has began. In January (1945) the Wileński railway station in Praga borough was opened. Waiting hall for travelers and staff area were made in makeshift barracks. Under similar conditions Warszawa Wschodnia (Warsaw East) railway station. Railway bridge near the Citadel was hurriedly rebuilt. First trains departed across the Vistula river in February 1945.

On the left bank of the Vistula river construction of Warszawa Zachodnia (Warsaw West) railway station started. It was also decided to build the Provisional Central Station, adapting warehouses of the former goods station of the Warsaw-Vienna Railroad at Towarowa 1 street for this purpose. The warehouse area of use ranged 1600 m2. There were organized waiting rooms and rooms for staff.

There was one platform and two arriving-departing tracks. Provisional railway station was opened for passengers on 2.07.1945. At eleven o’clock the first train departed to Skierniewice. Next day, 21 trains have departed.
Suburban train with steam locomotive class Okl27 with compartment coaches.