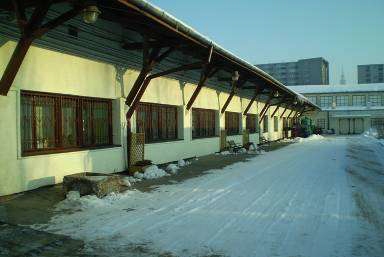 „The side pavilions partially kept the design and construction features of the old buildings. Their eastern ends were brought down to create space for new train station hall. It is hard to estimate when the two northern warehouses were merged in the way, that made one of the arms of U-letter arrangement two times longer. Perhaps it was only in 1946 that a single building was formed from the warehouse built in 1875 and the one from 1903. Both of the old buildings, the northern and the southern, were widened in the eastern part. They went under complete renovation and had been adapted for performing their new function. The architect strived to give the whole building complex a unified architectural appearance” (E. Leszczyńska, “Zabudowa Stacji Towarowej Kolei Warszawsko-Wiedeńskiej oraz Tymczasowy Dworzec Główny – rys historyczny”, Warszawa, p. 3).

The northern pavilion and the south pavilion

The northern pavilion, (marked with a letter „a” on the plans from 1947) was adapted from two warehouses (one from 1875, the other from 1903), merged into one building with its space ranging 2000 square meters. The eastern side of the building has been widened. From the side of the platform, the roof features were kept intact, with its wide eaves, reaching far over the front side of the wall, supported by wooden corbels. The pavilion had one floor, with a multi-axis facade. The industrial-type windows in the eastern part, vaulted by a segmented arch were most likely replaced by rectangular windows.
Along the northern façade, the ramp was most likely widened, creating the station train platform.

The pavilion at that time contained a waiting hall, luggage storage, a room for luggage sending, dining hall with a kitchen, customs office, rail MO station (Milicja Obywatelska - Civic Militia, an equivalent of police during the communist regime), post office, staff rooms and a boiler room for central heating, powered by a steam engine.

The south pavilion (marked with the letter „b” on the plans from 1947), ranging 1600 square meters, was adapted from warehouses built around 1875. Its pitched roof was kept. The southern facade, in the semi-basement, had a brick ramp used for freight hauling. The windows in its southern facade were rectangular shaped. The eastern part of the building had two floors. In the building, a waiting hall was made for suburban traffic. Also, luggage storage, a sanitary facility and rooms for administration were constructed. The western part of the building there was an office for the station attendants. The building was demolished in 1999.

The warehouse from 1903 kept its original prism, some changes were made nonetheless. For example, some windows were replaced by those in rectangular shape, façades were raised on the walls. However, a large number of original windows have been kept from replacement. They are industrial-type steel windows, with minute segmentations, closed by a segmented arch.
Original industrial-type windows, part of the northern pavilion from 1903, photo made in 2010. 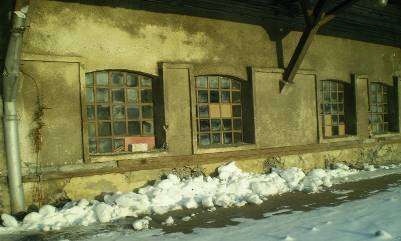